This guide is designed as a basic introduction to MDAnalysis to get you up and running. You can see more complex tasks in our Example notebooks. This page outlines how to:

This tutorial assumes that you already have MDAnalysis installed. Running the cell above should give something similar to:

MDAnalysis is a Python package that provides tools to access and analyse data in molecular dynamics trajectories. Several key data structures form the backbone of MDAnalysis.

A fundamental concept in MDAnalysis is that at any one time, only one time frame of the trajectory is being accessed. The trajectory attribute of a Universe is usually a file reader. Think of the trajectory as a function \(X(t)\) of the frame index \(t\) that only makes the data from this specific frame available. This structure is important because it allows MDAnalysis to work with trajectory files too large to fit into the computer’s memory.

Working with MDAnalysis typically starts with loading data into a Universe, the central data structure in MDAnalysis. The user guide has a complete explanation of ways to create and manipulate a Universe.

The first arguments for creating a Universe are topology and trajectory files.

For the remainder of this guide we will work with the universe u, created below. This is a simulation where the enzyme adenylate kinase samples a transition from a closed to an open conformation (Beckstein et al., 2009).

The MDAnalysis test suite is packaged with a bunch of test files and trajectories, which are named after their file format. We are using these files throughout this guide for convenience. To analyse your own files, simply replace the PSF and DCD above with paths to your own files. For example:

Working with groups of atoms¶

Most analysis requires creating and working with an AtomGroup, a collection of Atoms. For convenience, you can also work with chemically meaningful groups of Atoms such as a Residue or a Segment. These come with analogous containers to AtomGroup: ResidueGroup and SegmentGroup. For instance, the .residues attribute of a Universe returns a ResidueGroup.

The easiest way to access the particles of your Universe is with the atoms attribute:

This returns an AtomGroup, which can be thought of as a list of Atom objects. Most analysis involves working with groups of atoms in AtomGroups. AtomGroups can easily be created by slicing another AtomGroup. For example, the below slice returns the last five atoms.

MDAnalysis supports fancy indexing: passing an array or list of indices to get a new AtomGroup with the atoms at those indices in the old AtomGroup.

MDAnalysis has also implemented a powerful atom selection language that is similar to existing languages in VMD, PyMol, and other packages. This is available with the .select_atoms() function of an AtomGroup or Universe instance:

Numerical ranges can be written as first-last or first:last where the range is inclusive. Note that in slicing, the last index is not included.

Selections can also be combined with boolean operators, and allow wildcards.

For example, the command below selects the \(C_{\alpha}\) atoms of glutamic acid and histidine in the first 100 residues of the protein. Glutamic acid is typically named “GLU”, but histidine can be named “HIS”, “HSD”, or “HSE” depending on its protonation state and the force field used.

An AtomGroup created from a selection is sorted and duplicate elements are removed. This is not true for an AtomGroup produced by slicing. Thus, slicing can be used when the order of atoms is crucial.

The user guide has a complete rundown of creating AtomGroups through indexing, selection language, and set methods.

Getting atom information from AtomGroups¶

An AtomGroup can tell you information about the atoms inside it with a number of convenient attributes.

It also knows which residues and segments the atoms belong to. The .residues and .segments return a ResidueGroup and SegmentGroup, respectively.

Note that there are no duplicates in the ResidueGroup and SegmentGroup above. To get residue attributes atom-wise, you can access them directly through AtomGroup.

You can group atoms together by topology attributes.

For example, to group atoms with the same residue name and mass together:

A complete list of topology attributes can be found in the user guide.

The .positions attribute is probably the most important information you can get from an AtomGroup: a numpy.ndarray of coordinates, with the shape (n_atoms, 3).

A number of other quantities have been defined for an AtomGroup, including:

See the user guide for a complete list and description of AtomGroup methods.

The .center_of_mass() function, like many of the analysis modules in MDAnalysis, relies on having accurate mass properties available. Particle masses may not always be available or accurate!

Currently, MDAnalysis assigns masses to particles based on their element or ‘atom type’, which is guessed from the particle name. If MDAnalysis guesses incorrectly (e.g. a calcium atom called CA is treated as a \(C_{\alpha}\)), the mass of that atom will be inaccurate. If MDAnalysis has no idea what the particle is (e.g. coarse-grained beads), it will raise a warning, and give that particle a mass of 0.

To be certain that MDAnalysis is using the correct masses, you can set them manually.

After a topology object such as an angle is created, the value of the angle (in degrees) can be calculated based on the positions of the atoms.

Note that the order of the atoms matters for angles, dihedrals, and impropers. The value returned for an angle is the angle between first and third atom, with the apex at the second. Fancy indexing is one way to get an ordered AtomGroup.

The trajectory of a Universe contains the changing coordinate information. The number of frames in a trajectory is its length:

The standard way to assess the information of each frame in a trajectory is to iterate over it. When the timestep changes, the universe only contains information associated with that timestep.

After iteration, the trajectory ‘resets’ back to the first frame. Please see the user guide for more information.

You can set the timestep of the trajectory with the frame index:

This persists until the timestep is next changed.

This can then be converted into other data structures, such as a numpy array or a pandas DataFrame. It can be plotted (as below), or used for further analysis. 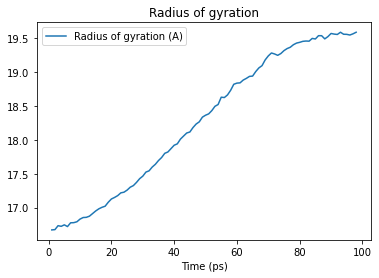 As seen above, coordinates change while iterating over the trajectory. Therefore, properties calculated from the coordinates, such as the radius of gyration, also change.

Selections are often defined on static properties that do not change when moving through a trajectory. Above, the static selection is all the atoms that are in a protein. You can define the selection once and then recalculate the property of interest for each frame of the trajectory.

However, some selections contain distance-dependent queries (such as around or point, see selection keywords for more details). In this case, the selection should be updated for each time step using a dynamic selection by setting the keyword updating=True. This command gives an UpdatingAtomGroup rather than a static AtomGroup.

MDAnalysis supports writing data out into a range of file formats, including both single frame formats (e.g. PDB, GRO) and trajectory writers (e.g. XTC, DCD, and multi-frame PDB files). (You can also write selections out to other programs, such as VMD macros.)The user guide has a complete list of formats, each with their own reference pages.

The most straightforward way to write to a file that can only hold a single frame is to use the write() method of any AtomGroup. MDAnalysis uses the file extension to determine the output file format. For instance, to only write out the \(C_{\alpha}\) atoms to a file in GRO format:

The standard way to write out trajectories is to:

For instance, to write out the \(C_{\alpha}\) atoms to a trajectory in the XTC format:

MDAnalysis comes with a diverse set of analysis modules, and the building blocks to implement your own. (Please see a list of analysis tutorials in the user guide.)

However, not all analysis uses this model. It is important to check the documentation for each analysis. You can also see examples in the Example gallery.

Below, simple RMSD analysis is shown. The rms module follows the interface above.

Not all sub-modules of MDAnalysis are imported with import MDAnalysis. Most analysis modules have to be imported explicitly.

MDAnalysis provides a rmsd() function for calculating the RMSD between two numpy arrays of coordinates.

An RMSD class is also provided to operate on trajectories.

Below, the RMSD class is created.

The RMSD is computed when we call .run().

The results are stored in the .rmsd attribute. This is an array with the shape (n_frames, 2 + n_selections).

We can interpret this as an array with 98 rows and 5 columns. Each row is the RMSD associated with a frame in the trajectory. The columns are as follows:

We can turn this into a pandas DataFrame and plot the results. 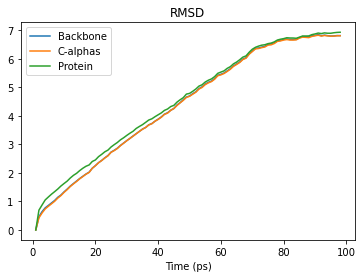 See the the RMSD and alignment notebooks for more information.

When using MDAnalysis in published work, please cite both these papers:

The primary sources of each module will be in their documentation.

Citations can be also be automatically generated using duecredit. Complete installation and usage instructions can be found in the user guide, but it is simple to generate a list of citations for your python script my_script.py.

This extracts citations into a hidden file, which can then be exported to different formats. For example, to display them as BibTeX, use the command: